A PLACE IN THE MIDDLE is a powerful tool for opening minds and sparking dialog in K-12 schools, as well as in colleges, workplaces, faith communities and families. It's entertaining, engaging and informative, and at 25 minutes long fits perfectly into a classroom or workshop. Here are some additional resources to help make the most out of your screening. 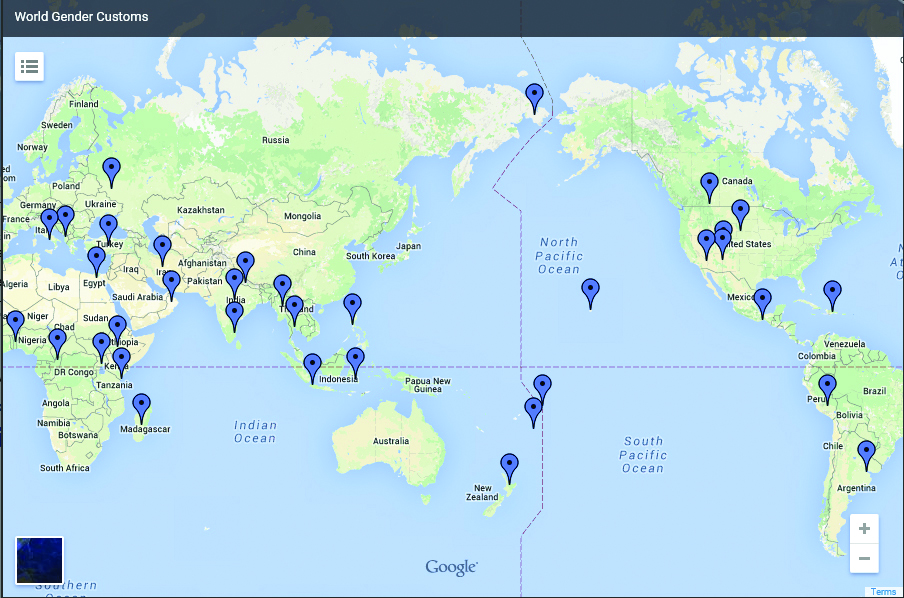 For all of recorded history, thriving cultures have recognized, revered and integrated individuals who were not exclusively male or female and established traditions for third, fourth, fifth or more genders. In many times and places, people who were seen to bridge the genders were thought to possess wisdom that traditionally-gendered people did not, and were venerated for this.

VIEW THE MAP ON THE

Halau – school; literally: a branch from which many leaves grow

Lokahi – connections; connectedness; in the film, the name of the school

Māhū - People with both feminine and masculine traits; hermaphrodite; gay

Pualu - Assembly; to work together

A Place in the Middle Education Guide. PBS Hawai'i and PBS have curated FREE, standards-aligned videos, interactives, and lesson plans..

Hawai'i Alive – Bringing Hawaiian Culture to Life. Bishop Museum Web site with articles on a wide range of Hawaiian cultural and historical topics. These are linked to the museum's collections and to the relevant Hawai'i State Educational Standards.

Hawai'i and Native Hawaiians - What You May Not Know. This 2013 article by Stephanie Namahoe Launiu is a short resource aimed at newcomers to Hawaiian history.

Then There Were None. This 2013 documentary film is “a story born from unspoken words, unshed tears, and wounded spirits. It is an effort to give voice to kupuna (elders), who have become strangers in their own land. To millions of travelers the world over, Hawai‘i is an alluring picture postcard paradise. But to its Native Hawaiian people, nothing could be further from the truth.”

Native Men Remade: Gender and Nation in Contemporary Hawai‘i. This 2008 book by Ty P. Kāwika Tengan tells the fascinating story of how gender, culture, class, and personality intersect as a group of indigenous Hawaiian men work to overcome the dislocations of colonial history.

Two Spirits, One Struggle: The Front Lines of Being First Nations and Gay. A 2014 article by Kelsey Klassen. Scroll down to the section “Taking back two-spirit” to learn more about the history of two-spirit peoples.

Understanding Transgender. One of many helpful resources from the National Center for Transgender Equality.

Human Rights Campaign. HRC offers this downloadable pamphlet, a great resource to share with students who are questioning their own gender identity, including resources for those who are beginning to identify as transgender.

Teaching Tolerance. Among their many resources for creating a school climate that is supportive of LGBT students, the Teaching Tolerance project of the Southern Poverty Law Center offers this helpful glossary of terms.

Perspectives for a Diverse America. Also from Teaching Tolerance, this is a standards-style framework for anti-bias education.

GLSEN. The resources offered by the Gay, Lesbian, and Straight Education Network include the National School Climate Survey on the realities of school life for LGBT youth, as well as guidelines for establishing Gay-Straight Alliance, teaching strategies, and lesson plans.

GLAAD. The “Ally’s Guide to Terminology” – published by the largest anti-defa- mation organization in the U.S. focused on the LGBT community – clarifies terminology for people engaged in conversations about LGBT people and issues

The Bully Project. This documentary film-inspired project has evolved into a national social action campaign to stop bullying. A wide variety of useful tools are available for educators, parents, students and advocates.

Share My Lesson. Lesson plans for elementary, middle and high school teachers, including a variety of LGBT content.